The Maratha kings of Thanjavur were known for the welfare of their subjects, other visitors and the pilgrims who comes to their kingdom. They had not only catered the needs of the pilgrims by providing night stay and food but also provided medical aid. In fact they had a separate administrative wing for this purpose. Most to the administration of this welfare schemes were headed, handled by the wives of the king.

They had every built Chatram at every twenty miles in the route of pilgrimage which will take care of the needs of the pilgrims. To know more on this as to how it was functioning and the welfare programs of the Maratha kings of Thanjavur kindly read 'Chatrams, Chavadis and thaneer pandal' in our web page “Hanumar Temple, Mothirappa Chavadi, Thanjavur”.

Needamangalam is one such place where the Maratha king Sri Pradhapa Simhan had built chatram. This chatram was administrated by Yammunambal, one of his many wives. Even today there exists a building “Yammunambal Chatram” in this town. [It is another story that such a wonderful monumental building is maintained in ruins by the local Government machinery.

Needamangalam is a town and Taluk headquarter in Thiruvarur District of Tamilnadu, situated between Thanjavur and Tiruvarur. 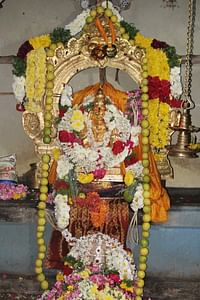 Sri Prathapa Simhan was a Maratha ruler of Thanjavur from 1739 to 1763. He had a built a palace and chatram for one of his wife Yamunambal and named the township in her name as “Yamunambalpuram” and presently known as Needamangalam. Since she had no son through the king, she was advised to pray to Sri Rama as Santhana Raman. Accordingly she had built a temple for Sri Rama for worshipping Him as Santhana Raman. On a designated day she and Sri Prathapa Simhan took bath in the temple tank and started worshiping Sri Santhana Raman.

Yamunambal was loved by one and all of this place. People had built a temple for her after her demise. Even today pregnant ladies come to this temple and offer prayer for easy and safe delivery of the child.

The temple is east facing and facing the “Saketha Pushkarini”. The temple car is also seen on south-east corner of the pushkarini. Entrance to the temple is through an archway with a Sri Rama darbar figures decorating the top of the archway. Temple has a three tier raja gopuram after this.

Sri Santhana Rama gives dharshan to devotees at the Gharbhagraham with Sita Ma on His right and Lakshmana on His left. Utsava Santhana Rama is seen as Kothanda Raman with arrow in right hand and bow in left hand along with Sita Ma, Lakshmana and Anjaneya. It is fascinating to see this wonderful moorthis. In this temple of Rama, there is no separate sannidhi for Sri Sita Devi since Sri Sita Devi bestows the blessing to the devotees along Santhana Raman in the main Gharbhagraham itself.

Now when you come to the prakaram, you can have Dharshan of Tumbaikai Alwar (Vinayak), Pakshirajan and Vishnu Durgai. In the Vagana mandapam there are horse vahana, elephant vahana and surya prabha. What attracts us the most is the sacred vehicle of this temple, Sri Hanumath vahanam. Maruti is present as realistic as a vahanam of Sri Rama here. One hundred and eight names of Rama are also displayed here. There is also Vasantha Mandapam.

In the mandapam in front of the Rama Sannidhi, there are mortar mould sculptures [stucco figure] of Ksheeraptinathan, Seethakalyanam, Pattabiramar, Sethubandanam and Agalya Sapa Vimosanam. In the Sannidhi Vimanam Sri Narasimha [south], Pattabiraman [west] and Parampadanathan [north] mortar figures are seen.

It is a practice that the couple praying for a child ties a cradle in this temple.

There is a temple for Sri Anjaneya under the administrative control of the Sri Santhana Rama devasthanam on the north-east corner of the pushkarini. Temple was adjacent to the Yamunambal chatram then. Although presently, these two seems distinct, it should have been a part of chatram then. Normally sannidhi for Sri Anjaneya in ‘anjali-hasthan’ posture is found along side of the temple car. Looking at the posture of Sri Anjaneya, it seems to that His Sannidhi was a part of the chatram.

The temple and Sri Anjaneya are facing west. Temple has been protected with compound wall. Temple hall roof is typical Thanjavur style cylindrical converged at the end in shape. There are two halls of this style, one running east-west and the other north-south. The garbhagraham is in north-south hall. Devotees can darshan of Sri Anjaneya from the main road itself.

Idol of Sri Anjaneya made of granite is sculpted in embossed form. Although it seems embossed the ‘moorthi’ is more near to the full sculpt.

Sri Anjaneya is seen walking southwards with His left foot forward. His right foot seems ready for the next step. Anklets [thandai] are seen in His both lotus feet. He is wearing dothi in kacham style. In His raised left hand ‘sanjeeivi parvat’ is seen. The raised right hand in ‘abhaya mudra’ He is showering blessings on devotees. He is wearing kankan in both the hands. Ornaments are seen in His bosom. The tail goes above His head and taking a curve at the end. The small bell at the end of the tail adds beauty to the ‘langoolam’. His slightly upward looking face adds to His majesty. His slightly puffed-up cheeks enhance the beauty of the eyes of the Lord. Kundalam is seen the ears of the Lord. His kesam is combed neatly, plaited and held tightly by a knot.

Beauty lies in the eyes so also compassion. Sri Hanuman seen carrying ‘Sanjeevi’ seems to carry hope for all righteous things to happen. Prayer to Sri Rama and Hanuman at this kshetra is bound to bless virtuous ‘santhanam’.