Thanjavur was the capital of Cholas. Following the downfall of Chola rule in the 13th century, the Thanjavur area came under the rule of the Pandyas and then, following the invasion of Malik Kafur, it fell into disorder.

Till the rulers of Vijayanagara Empire focused their attention on Thanjavur, it had not gained the limelight. Vijayanagara Kings captured reign of Thanjavur in 14th Century AD. Sevvappa Nayak (AD 1549-1572), a Viceroy of the Vijayanagara Empire assumed independent charge and founded the dynasty of the Thanjavur Nayaks. He built a new fort known as Sivaganga Fort - named after him – encompassing the Brihadeeswara Temple. Thanjavur remained the capital of the Nayaks for the next one hundred and twenty five years till the reign of Vijayaraghava - the last prince in the line. It is well known the Nayaks, who hailed from Vijayanagara, are great devotees of Lord Hanuman and drew their strength from Him and kept their valour and zeal in high spirit.

While Nayaks, the rulers of Thanjavur were loyal to Vijayanagara kingdom, Nayaks of Madurai (Alagiri) wanted to capture the power of Thanjavur and was successful in overthrowing the then Ruler Vijayaraghavan of Thanjavur Nayaks. A son of Vijayaraghavan induced the Bijapur Sultan to help him get back the Thanjavur throne. In 1675, the Sultan of Bijapur sent a force commanded by the Maratha general Venkoji (alias Ekoji and half brother of Sivaji) to recapture the kingdom from the new invader. Venkoji defeated Alagiri, and occupied Thanjavur. He did not, however, place his protege on the throne as instructed by the Bijapur Sultan, but seized the kingdom and made himself king. Thus began the rule of the Marathas over Thanjavur.

During the Chola period, Periya kovil acted as a cultural center where medical facilities were extended to the citizens and housing for performing artists was taken care. Culture established during this period continued further in Thanjavur. After a dwell, during the period of Nayaks rule as well as Marathas rule, the cultural and religious activities of Thanjavur were revived. During these times it was at its peak turning Thanjavur into a power house of Culture. Art, sculpture, performing art like music, dance, all flourished with new and innovative ideas. Both these dynasties patronised these activities. Literature saw new height. On the religious front new temples were built and old ones were renovated. On the welfare side, new waterways, roadways were built, tax collection made simple and easy. Courts functioned for the established law.

With the advent of Ramanandi Sampradaya by Ramananda in north India and bhakti movement in south India, devotees took to pilgrimage to many sacred places of India. The practice of going on pilgrimage to Varanasi for devotees of south, pilgrimage to Rameswaram for the devotees of North saw new height and rejuvenation. All most all the rulers extended support and facilities for these devotees on pilgrimage and Thanjavur rulers are no exception. Especially during the Maratha rule, it was taken as a social, educative and welfare cause. Lot of efforts were made to provide these devotees on pilgrimage, the facilities they require for this long journey and at the same time provide food, sustenance work, medical attention and education to the local people. A unique method was devised by the Marathas of Thanjavur for this. 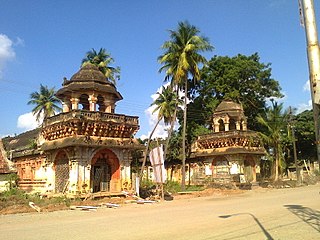 Chatrams are wayside inn which provides food and shelter to the pilgrims. Chavadis are the rest place or a temporary shed used for common welfare activity. Normally chavadis are used for collection of tax at the entry point of the city from people coming into the town for business/trade etc. Marathas formed a trust for these chatrams and its maintenance. The welfare activities like providing food, attending on sick pilgrims etc. were taken care of by the trust which was managed by the senior queen. The chatrams extended facilities for educating the pupils, it also provided food and stay for these students.

There were more than 20 inns during the Maratha rule from 1743 to 1837. Most of the inns were built for the relaxation for the pilgrims who are on their way to Rameswaram, and these inns provide food to all the pilgrims without any discrimination.

In many places “thaneer pandal” have also been set up during the summer providing water, butter milk for the pilgrimages. A few villages were donated to each inn. All proceeds from the occupation were spent on managing the inn. Food was prepared from grains grown on subsidized village lands and distributed to inns.

Travellers who fall sick at the chatram or before their arrival receive medicine and proper diet and were attended to with respect and kindness till their recovery.

All the chatrams established by the Marathas had an excellent building for housing pilgrims, students and teachers. Cooking place, big halls for gathering of people and the halls were also used for function etc. Most of the Chatrams had there own huge water tank and a small temple. This feature is seen in all the chatrams built by the Maratha rulers.

The Marathas who came and settled in Thanjavur were of two sects. One faction was called "Cannaugulya" [शहाण्णव कुळी – ninty six families]. Royals and relatives are known by this name. Marathas who belongs to army, Guard are the other branch. The inter marriage between them is not prohibited. When any of these two branches marry a local, the off springs are not considered as Marathas, even though they spoke Marathi. These off springs were denoted with a special sir name “Appa” or “Anna”. Most of them were rewarded with a good position in government. To name few of these Appas - Manaji appa, Dathaji appa, Muththoji appa, Malarji appa, who are well known and some streets or locality had been named after them.

The place Mothirappa chavadi is in the outskirts of the present Thanjavur, on the road which connects Thanjavur with Kodikkarai. Kodikkarai is located in Rameswaram. The highway laid during the olden days leading to Rameswaram had been named as Kodikkarai perumsalai. Earlier days pilgrims who are moving from north of India to Rameswaram took the route via Chitambaram, Kumbakonam and take this highway to reach Rameswaram. There are many chatrams built in this highway by the rulers during the Maratha time. As explained earlier these chatrams used to provide all facilities including medical needs to the pilgrims who are on move to Rameswaram.

As narrated earlier Chavadis were established at almost all the exit and entry points for collection of tax from the persons who are required to pay tax to the treasury. The job of collecting the tax was entrusted to the trusted persons of the rulers. The revenue collection at this chavadi might have been entrusted to officer named Mothirappa and therefore it is presumed this chavadi got this name.

During the regime of Serfoji manufacturing of cotton and silk cloth were encouraged. Growing of cotton was encouraged, but a tax was laid for growing of cotton. To make cotton or silk as thread and to make it as cloth a separate tax was laid. This tax is known as “Moturpha” [tax on looms] as per the old records. It is possible that such taxes were to be paid at this particular Chavadi, and hence it might have got the name Mothirappa chavadi.

A close look of the present site one could see that this Chavadi established for the purpose of collection of tax was also discharging the duties of a Chatram. The defunct water tank, a temple for Sri Hanuman, ruins of old building, all these indicates that this chavadi was also functioning as Chatram.

To reach the Hanuman temple presently one had to take the side road adjacent to the newly constructed over bridge. The location is known as Evergreen Nagar and the road as “Hanuman Kovil Street”. The temple with fairly big compound is located on the left side, which could be seen from the distance itself. The environment is good with trees all around. The temple is south facing. The temple is compact and has a compound wall.

In the entrance of this temple is through arch with two pillars, and resting on two pillars a beautifully rendered stucco figure in mortar mold of Sri Rama, Sita, Lakshmana and Anjaneya. After entering the temple through the main arch, the sanctum sanctorum is located in the center of a big mantapam (a decorated porch). In front of the sanctorum there is a long verandah. The façade of the temple has an elegant four feet tall stucco figure of Sri Anjaneya with mace in His left hand and with right hand showing ‘abhaya mudra’.

On the three sides of the vimanam of the sanctum has similar figure of Sri Anjaneya. There is path around this for devotees to make circumambulation.

Both the lotus feet of the Lord are adorned with thandai and nupur. Lord is wearing dhoti in kacham style and girdle made of a triple string of mouja-grass. The hip belt holds a small knife. His left hand adorning keauram in upper arm and bracelet in fore-arm is seen folded upward and holding ‘Sanjeevi parvadham’. The bahu-vallayam adds beauty to His shoulders. The yagjopaviitam is seen across His broad chest. He is wearing two malas as ornaments, one of which has a pendant adorning His bosom. He is wearing an ornament close to His neck. With His raised right hand showing ‘abhaya mudra’ He showers fearlessness and blessings on His devotees. The tail of the Lord rises above His head, the end of which is slightly coiled. Lord is wearing ear-studs which are touching His shoulders. Lord is also wearing ‘karna pushpam’ in His ears. The ‘kora pal’ i.e. the projected tooth of the Lord adds to His beauty. His bright eyes are radiating compassion on the devotee. Neatly combed ‘shika’ tied in a knot could be seen on the side of the right ear.

Lord of the kshetra was worshipped by pilgrims who were on the way to have dharshan of Setu constructed by Sri Rama, also Eswara consecrated by Sri Rama and Eswara brought by Sri Hanuman at Rameswaram. With the blessing of the Lord they were successful in their mission, so also we will be.