Srirangam in Tamil Nadu near Trichy is the first among the one hundred and eight Divya Desams. Out of the twelve Azhwars, eleven Azhwars had sung in praise of the presiding deity Sri Ranganathar of this kshetra. For the worshippers of Sri Hari ‘koyil’ means only this kshetram. The temple complex is as big as a city itself, and the architecture of the complex is so, that the main deity is enclosed in seven ‘chutru’. The revered temple was the epicenter of dwita philosophy and has a long history.

Sriranga Mahathmiyam brings out in detail the origin of the great temple in Srirangam in Tamil Nadu. Brahma meditated upon Sri Vishnu and in His supreme trance received the gift of the Vishnu's deity, "Ranga Vimana". The deity was in worship at Ayodhya after being passed on by Brahma to Viraja, Vaiswatha, Manu, Ishwaku and finally to Sri Rama. Since the deity “Ranga Vimana” was in worship by the dynasty of Ishwaku He is known as “Kula Dhanam”. Sri Rama worshipped the deity for a long time at Ayodhya, and gifts the same to King of Lanka Sri Vibhishana. When Vibhishana was going via Trichy en route to Sri Lanka, the deity wanted to stay in Srirangam. Ranganathan, captivated by the devotion of a King called Dharma Varma, who was doing penance to have Lord Ranganathan to permanently stay at Srirangam, stayed put, promising to cast his benign glance eternally on Lanka. Hence the deity (in a reclining posture) faces south towards Lanka.

Srirangam has a glorious history right from the days when the temple town was under the rule of Dharma Varma. In modern times, one cannot forget Malik Kafur ransacking the city, and paving way for the Delhi Sultanate to follow.

According to Muslim historian Jiauddin Barani, Malik Kafur went back to Delhi with 241 tons of gold, 20000 horses and 612 elephants laden with the looted treasure.

The uttsava murti of Sri Ranganatha Swamy is known by the name Namperumal. While the south India was in the spade of invasion by Malik Kafur, devotees of Sri Ranganatha had made a make believe temple of the deity, and had taken away the Namperumal to a safer place. Namperumal had to travel in hiding through safer areas, but the devotees who had accompanied the deity had performed all the poojas during this journey. Namperumal was away from the moolavar at Srirangam from the year 1322 and returned to Srirangam in the year 1371 only after tranquility returned to Srirangam under the Vijayanagar rule.

The Vijayanagara Empire was established in 1336 by Harihara I and his brother Bukka Raya I in the Deccan Plateau region in South India as its base. The empire rose to prominence as a culmination of attempts by the southern powers to ward off Islamic invasions by the end of the 13th century. The empire founded by Harihara and Bukka were supported and inspired by H.H. Sri Vidyaranya, Sankaracharya of the Sringeri mutt to fight the Muslim invasion of South India. This dynasty was known as Sangama Dynasty. They had conquered the entire south India and appointed their representative known as “Mandaleswarar” to rule on their behalf.

All the Mandaleswarars appointed by the empire were restoring the temples and were reinculcating unity among the followers of sanadhana dharma.

The power of the empire was usurped from the Sangama dynasty emperor Praudha Devaraya by one of the Madaleswar Saluva Narasimha Deva Raya in the year 1485. In 1486 he declared himself as the emperor and a new dynasty namely Saluva was in control of the empire.

On seeing that a mandaleswar had become the empire, many mandaleswars who were loyal to the Vijayanagar Samrajya till then had declared independents and started to rule the territory of their own. Notable among them are Konerirayan and Mabali Vaanaatirayan in Tamilnadu region.

Srirangam was under the rule of Konerirayan and he had done many contributions to this temple at Srirangam and also to temple at Tirupati. Although he is a Shivate he had love for Vaishnavism also.

Due to the compelling political reasons and the change of guard at Vijayanagar from the Sangama dynasty to Tuluva dynasty, the then emperor Tuluva Narasa Nayaka fought a war against Konerirayan in the year 1496 and Narasa Nayaka took over Srirangam.

Dispute of Srirangam and Tiruvanaka 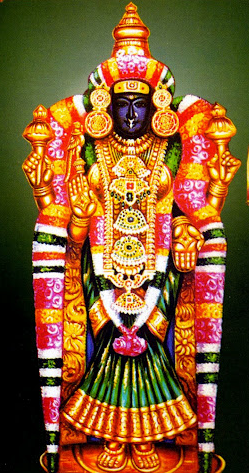 It is said that during old days it was customary that during the annual Brahmotsavam, Namperumal - Uttsava murti of Sri Ranganatha would visit His sister Sri Akiladeswari Ambal at Tiruvanaika, rest for a while at the mandapam near the entrance of Tiruvanaika temple and return to Srirangam.

During the invasion of Malik Kafur Nam Perumal was away from the temple. After about 50 years, Sri Ranganatha Uttsavar (Nam Perumal) returned to Srirangam in the year 1371. After nearly ninety years of absence the practice of Namperumal visiting Tiruvanaika was to be restored but there was resistance to the revival of this practice. From then on the there was dispute between Srirangam and Tiruvanaka, regarding jurisdiction.

Despite mediation efforts the dispute continued...

Sri Vyasaraja was a great saint of that time and follower the Dwita philosophy of Sri Madvacharya. He was the Rajaguru for both Saluva and Tuluva dynasty of Vijayanagaram. He was instrumental for the renovation of many temples that were destroyed during the on slaught of Malik kafur. He was a great devotee of Sri Hanuman and had built many temples for Sri Anjaneya.

More about him in our site Sri Hanumath Devotees - Sri Vyasaraja ”

Sri Vyasaraja was the Rajaguru of Vijayanagara Empire and was on a visit to Srirangam. When on such a visit the dispute of boundary between Srirangam and Tiruvanaka was brought to his notice. He offered a solution to this vexing problem which was cropping up again and again. He stated that he will hold his breath and walk in each of the four directions from the main garbha graha of Sri Ranganatha. Wherever he stops holding his breath, that spot will be marked as the boundary of Srirangam.

Like said he walked in all direction and determined the boundary of Srirangam.

It is customary of Vijayanagara to mark the boundary of villages with a temple for Sri Anjaneya. With no exception Sri Vyasaraja who was also devotee of Sri Hanuman had built four Hanuman temples at these four places marked as boundary of Srirangam. Today three of them are in existence and one at ellaikarai mandapam had been removed over the time.

On the eighth day of annual celebration Namperumal visits the other ellaikarai of Srirangam on the banks of Kollidam River. This is north east of Sri Ranganatha temple. There is a mandapam at this ellaikari and Sri Ranganatha comes in a palanquin here on the eighth day and returns to His temple in an Equestrian [horse] vahanam via Kollidam River. The mandapam at this place is known as “Ellaikarai mandapam”. This is part of the practice as mentioned in the above paragraphs but without the visit to Tiruvanaika.

There is no temple for Sri Hanuman found nearby here.

There are the two places which are presently known with a prefix “Ellaikarai” indicating that these points were once used as a demarcation of the territory of the Srirangam town. The first one is Ellaikari mandapam and the second is Ellaikarai Anjaneya temple at Srinivasa Nagar.

The temple in Srinivasa Nagar near Railway over bridge is known as Ellaikari Anjaneya Temple which is under the control of Sri Vyasaraja Mutt of Srirangam. This is south east of Sri Ranganatha temple.

The deity of Lord Ellaikarai Sri Anjaneya Swamy of Srirangam is about two feet tall made of hard granite stone. He is in a walking posture and the carving is of ‘ardha shila’ type. Lord is seen walking southward with His left lotus foot adorning nupuram and thandai in the front. His right lotus foot is seen slightly raised from the ground. His left hand adorning bracelet is seen resting on the left hip and in his hand he is holding the stem of sowgandika flower. The flower which is in half blossom state is seen above His left shoulder. He is wearing ornaments which adorns His bosom. With His other hand raised above He showers blessings on His devotees. The tail of the Lord is raised above His head with a curved end which adorns a small beautiful bell. The Lord is wearing ear-studs which are touching his shoulders and His kesam is neatly tied. His eyes are glowing and emitting karuna on the devotee.

Bright glowing eyes Lord Anjaneya of the kshetra is a figure to be meditated upon. His presence can be felt in this kshetra and is so powerful and peace will descend on you when meditate here.