The Anjaneya the dispeller of Sri Rama's grief 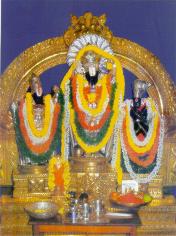 Anjaneya, the height of humility, celibacy, magnanimity, presence of mind, valour and courage visits Lanka in search of Mata Shree Seetha as an emissary of Sri Rama. He carries back the message of Sri Seetha as also the Chudamani given by her to Sri Rama. In Lanka Anjaneya submits himself to the Brahmastra cast by Ravana's son Indirjeet. The demons, assisting Indirjeet, without knowing that Sri Anjaneya was under the spell of Brahmastra starts binding Anjaneya with chains and ropes and consequently the effects of Brahmastra were nullified. Thereafter Anjaneya was taken to Ravana's court. Ravana orders that the great monkey be burnt by its tail and subsequently Sri Anjaneya gets out of Lanka after burning a part of the City. The swayambu Anjaneya Swami - the presiding deity of the Bangalore's "Karenji Anjaneya temple"- depicts the 'swaroopa' of Anjaneya who is returning to meet Sri Rama after locating Mata Sri Seetha in Lanka.

The Bangalore subsequently was under the rule of Vijayanagar kings. Kempegowda-I (1513-1569), the ruler of Yelahanka, predatory to the Vijayanagar rulers, was a great builder of tanks and temples. He had planned the modern Bangalore and built it. The southern boundary of Bangalore was a huge lake amidst the rocks. This area is known as Karenji. In Kannada "kare" means lake and "enji" means remains. Then the lake was in existence from where the present day National College is located to just beyond Bull temple. Therefore the entire area gets the name Karenji.

During his exploration of the area of the town he was planning to build, Kempegowda-I came across the hillock housing the swayambu Anjaneya Swami in the Karenji area. He built the Gharbhagraham for the Anjaneya Swami and also arranged for the performance of the Pranaprathista of the deity. He made arrangements for the performance of the daily pujas in the temple. It is believed that Janamejayan, the grand son of Abimanyu, had done penance at the hillock in which Anjaneyaswamy's idol is located.

There is another temple built by Kempegowda-I dedicated to the Rishaba - the carrier of Lord Siva. This is known as Nandi temple -in English it is Bull temple and in Kannada it is Basavana Gudi. The locality draws its name Basavanagudi from this temple. While this temple is most popular among the tourists who are visiting Bangalore, the Karenji Anjaneya Swami temple which is just few hundred meters away has maintained its exclusivity and one gets peace of mind on visiting this temple. The reverberations of the manthras, recited by the 96 years old priest Sri Lakshmi Narayanachar is splendid to hear.

The lakshanas of Anjaneya moorthi

A gigantic twenty two feet mono stone sculpture depicting the deity is a feast to the eyes. Anjaneya is north facing as he is returning from Lanka. One could see the Mata Sri's Chudamani held with all piousness in both his palms. Fury with which he had fought Indirjeet, his assistants and the other demons of Lanka can be imagined while keenly observing the deity, what with the 'kora-pal' (protruding teeth - the teeth that of a lion) showing and also in the properly tied up tuft having got loose. The 'Kaupina vasthram' (loin cloth) is held by the 'oddiyanam' and a dagger dangling in his hip also are clearly seen. One could see the broken chains in the arms along side the bangles known as 'kankana', as also broken chains with bells around, in the anklets along side the 'thandai'. They represent the remains of the bonds with which the assistants of Indirjeet had tied Sri Anjaneya. With the glowing eye Sri Anjaneya blesses one and all of those who visit him.

The 'kataksha' of Anjaneya Swami

The 'kataksha' of Swami in this 'kshethra' is so good and benign that while with the look from one eye Sri Anjaneya is ensuring that the Chudamani given by Mata Shree and held in his hand is safe he does not fail to bless the devotees with his kataksha from the other eye.

On receiving divine directions, Sri Muthnjirao Scindia - the Maratha chieftain - built a Rama temple facing Sri Anjaneya.'s locale. The Ram Mandir is built in accordance with the agama vidhis and Sri Rama is seen with his consort Mata Sri Seetha, His anuja Lakshmana. There is a small opening in the northern wall of Anjaneya temple through which Sri Anjaneya is ever seeing His Lord.

Next time when you visit Bangalore, bring home the blessings of Karenji Sri Anjaneya Swami.

**We acknowledge courtesy extended by shri r.krishanan
of Birmingham for the photo of the Lord Anjaneya embossed
in the dwaja sthamba of the karanji temple.
[ed. 22.10.2001]